Ebbets Field was on the block bound by Bedford Avenue, Sullivan Place, McKeever Place, and Montgomery Street. After locating the prospective new site to build a permanent stadium to replace the old (and wooden) Washington Park, club owner Charlie Ebbets acquired the property over several years, starting in 1908, by buying parcels of land until he owned the entire block. This land included the site of a garbage dump called Pigtown because of the pigs that once ate their fill there and the stench that filled the air. In 1912, construction began. By the time it was completed, a year later, Pigtown had been transformed into Ebbets Field – baseball’s newest shrine, where some of the game’s greatest drama would take place.

Following an inter-league exhibition game against the New York Yankees on April 5, 1913, the park formally opened on April 9 against the Philadelphia Phillies. Initially, the seating area was a double deck from past third base, around home plate, and all the way down the right side. There was an open, concrete bleacher extending the rest of the way down the left side to the outer wall. There was no seating in left or center. The right field wall was fairly high due to the short foul line (around 300 feet) but had no screen or scoreboard at first. The ballpark was built on a sloping piece of ground. The right field wall made up the difference, as the right-field corner was above street level. The left field corner was below street level, and there was an incline or “terrace” running along the left field wall.

As was the case of Boston’s Fenway Park and Detroit’s Tiger Stadium (two ballparks that opened one year earlier, in 1912), the intimate configuration prompted some baseball writers to refer to Ebbets Field as a “cigar box” or a “bandbox.”

Ebbets Field was the scene of some early successes, as the “Robins” (so-called for long-time manager Wilbert Robinson) won league championships in 1916 and 1920. The Ebbets seating area was expanded in the 1920s, a “boom” time for baseball when many ballparks were expanded. The double deck was extended from third base around the left field corner, across left field, and into center field, covering the terrace and allowing right-hand hitters to garner many more home runs. By the 1940s, the big scoreboard had been installed, as well as a screen atop the high wall, which made right field home runs a little harder to come by. However, additional rows of seating across left field reduced that area by about 15 feet, to the delight of the sluggers.

After the early successes, though, the team slid into some hard times, which would continue for a couple of decades, until new ownership brought in first promotional wizard Larry MacPhail (in 1938), then, after MacPhail’s wartime resignation, player development genius Branch Rickey (in 1943). In addition to his well-known breaking of the color line by signing Jackie Robinson, Rickey’s savvy with farm systems (as with his prior work for the St. Louis Cardinals) produced results that made the Brooklyn Dodgers “Bums” a perennial contender, which they would continue to be for decades to come.

The Dodgers were soon victims of their own success because only a limited number of eager fans could cram into minuscule Ebbets Field, and it had almost no automobile parking for Dodger fans who had moved east to suburban Long Island, though it was near a subway station. Club owner Walter O’Malley announced plans for a privately-owned domed stadium for his Dodgers at the Atlantic Yards in Brooklyn, where a large market was being torn down, but New York City Building Commissioner Robert Moses wanted the city to build a stadium located in Flushing Meadows in the borough of Queens (the future site of Shea Stadium and Citi Field). O’Malley refused to consider Moses’ position, and Moses refused O’Malley’s. As a result, O’Malley began to flirt publicly with Los Angeles, using a relocation threat as political leverage to win favor with his desired Brooklyn stadium. Ultimately, O’Malley and Moses could never come to an agreement on a new location for the Dodgers, and the club moved west to Los Angeles. During the last two years in Brooklyn, the Dodgers played several games each year in Jersey City, New Jersey‘s Roosevelt Stadium, as part of O’Malley’s additional tactics to force a new stadium to be built.

The Dodgers moved to Los Angeles, California, after the 1957 season, while their long-time crosstown rivals the New York Giants moved to San Francisco, based upon O’Malley’s urging to Giants owner Horace Stoneham. That meant lights out for Ebbets Field, which was demolished, beginning on February 23, 1960. O’Malley’s removal of the franchise from its historic home has been referred to as “one of the most infamous abandonments in the history of sport” by the New York Courts. California courts, if ever called upon to express an opinion, doubtless would have a different view.

Ebbets Field was but one of several historic major league ballparks demolished in the 1960s, but more mythology and nostalgia surrounds the stadium and its demise than possibly any other defunct ballpark.

A great deal of history happened at Ebbets Field during its relatively short 45-year lifespan with the Dodgers. Of the many teams that uprooted in the 1950s and 60s, the Dodgers have probably had the largest number of public laments over their fans’ heartbreak over losing their team. A couple of decades later, Roger Kahn‘s book The Boys of Summer and Frank Sinatra‘s song “There Used to Be a Ballpark” mourned the loss of places like Ebbets Field, and of the attendant youthful innocence of fans and players alike. The story of Ebbets Field and the Brooklyn Dodgers’ move to Los Angeles were also chronicled by historian Doris Kearns Goodwin, figured into the plot of the film Field of Dreams, and were featured in an entire episode of Ken Burns‘ public-television documentary Baseball, as well as a 2007 HBO documentary called Brooklyn Dodgers: Ghosts of Flatbush.

Ebbets Field is arguably a more popular venue now than when it actually stood. Some fans who did attend games at the stadium remember it as cramped and decrepit towards the end of its life. The famous rotunda was said to be a bottleneck in the concourse. Baseball historians occasionally point out that although the stadium was no doubt a pleasant place to watch a ballgame, architecturally speaking it was not any more remarkable than several other “lost parks.” As of 2010, the Dodgers have played in Dodger Stadium for more years (49 through the 2010 season) than they played in Ebbets Field (45). Shea Stadium’s duration (1964–2008) was the same as Ebbets Field’s.

However, Ebbets Field has managed to transcend the realm of mere fact to become a kind of icon for what many see as the golden era of the national pastime, and its destruction symbolic of the “lost innocence” of a bygone era. Its influence can be seen in the current ballpark of the New York Mets, Citi Field, which features replicas of Ebbets’ exterior façade and entry rotunda, which is named in honor of Jackie Robinson.

Subsequent use of the former Ebbets Field site

Other sports at Ebbets Field

Though known as a cathedral for baseball, other sports were played at Ebbets Field as well. In addition to the professional football teams that played at the stadium, it was also home to Manhattan College‘s football team from 1932-1937.

The stadium also hosted a number of soccer games. On April 11, 1926, Ebbets Field hosted the US National Challenge Cup soccer tournament (now known as the Lamar Hunt U.S. Open Cup). Bethlehem Steel F.C. from Pennsylvania of the American Soccer League won its sixth and final National Challenge Cup title, scoring a convincing 7-2 victory over Ben Miller F.C. of St. Louis in the final before more than 18, 000 fans. On June 7, 1931, over 10,000 fans came out to Ebbets Field to watch Celtic of Scotland crush local side Brooklyn Wanderers 5 – 0. On June 17, 1947, the first known televised soccer game in the US took place at Ebbets Field when Hapoel Tel Aviv lost to the American League Stars 2 – 0. On June 18, 1948, Liverpool of England beat Djurgården of Sweden 3 – 2 in front of 20,000 fans at Ebbets Field. On October 17 of that year, the U.S. national team beat the Israel national team team in front of 25,000 at Ebbets Field. On May 8, 1955, Sunderland of England beat the American league Stars 7 – 2. On May 17, Sunderland tied FC Nürnberg of Germany also at Ebbets. On May 23, 1958, Manchester City of England lost to Hearts of Scotland 5 – 2 in front of 20,000 patrons at Ebbets Field. On June 28, 1959, Napoli of Italy lost to Rapid Vienna of Austria 1 – 0 in front of 18,512. At the rematch, also at Ebbets Field in front of 13,000 people on July 1, Napoli tied Rapid Vienna 1 – 1.

In Arthur Miller’s Death of a Salesman, Ebbets Field is mentioned by Willy’s wife, Linda, as the place of Biff’s game (89 in Penguin Plays ed., 1949). This is immediately mocked by their neighbor, Charley, thereby serving as a symbol of the family’s downfall at the hands of modernity and self-delusion. The field is also mentioned in The Zodiacs by Jay Neugeboren, a story about a team in Brooklyn.

The only time I ever saw him excited—-outside of what happened with him and our team—-was when our fathers would take the two of us to games at Ebbets Field.

In The Amazing Adventures of Kavalier and Clay, by Michael Chabon, the novel’s two protagonists attend a Brooklyn Dodgers football game at Ebbets Field.

In the movie Heist, Gene Hackman remarks that with enough preparation, one could steal Ebbets Field. Danny DeVito notes that this is impossible since the field has been gone for years. Hackman believes this proves his point.

In 1988’s Field of Dreams, author Terrence Mann (James Earl Jones) was quoted in an interview discovered by Ray Kinsella (Kevin Costner) saying that his childhood dream was to have played baseball with the Brooklyn Dodgers at Ebbets Field, but the team moved to Los Angeles and the field was torn down, and his dream never did come true.

On the television series, McHale’s Navy, Torpedoman Lester Gruber (Carl Ballantine) often makes mention of his life growing up in Brooklyn. He talks about Bensonhurst and, especially about the Dodgers and Ebbets Field. In an episode entitled, “The Day the War Stood Still”, he even says, “Forward all my mail to Ebbets Field.” In an episode entitled, “Reunion for PT-73”, Mc Hale (Ernest Borgnine) and the crew are trying to convince Captain Binghampton (Joe Flynn) that he is in New York City in 1950. Gruber holds up a newspaper and exclaims, “Those Brooklyn Bums blew another one…..maybe we’ll win the pennant next year…..in ’51!” 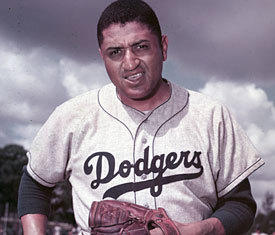 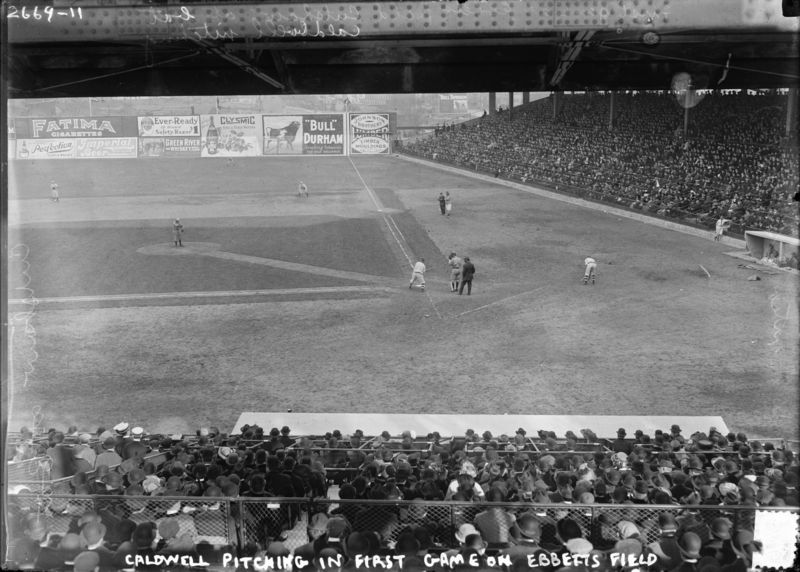