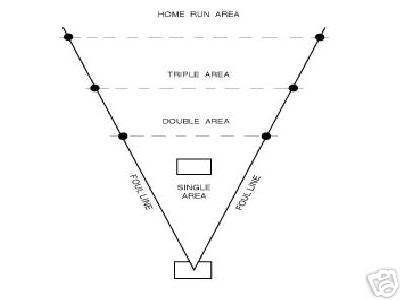 Wiffle ball is designed for use in congested areas. Because the ball will not travel that far it makes sense to use stickball type rules with balls traveling certain distances gives the batter types of hits, such as singles, doubles, triples and homeruns. Much like stickball, base running is optional, personally we hardly ever use it. The size of the playing field is optional, we recommend deciding what product you are going to use first.

Here are some thoughts on various Wiffle Ball Rules.

The field should be laid out with foul lines and markers for singles, doubles triples and home run areas. Port -a – Field makes a great product for you to use to set up your Wiffle ball fields.

Backyard ball and baseball or played on the same premise.  The great thing about Wiffle Ball is that you can customize rules. BUT you need to decide on those rules before you play.

An out for the batter can be made in three ways:

As petty as this sounds some leagues require you to field the ball cleanly and away from your body. I always played as long as you caught it before it hit the ground that is fine with us. I can see benefits for all the rules but I have made my share of catches that I tipped first. It was affectionately known as the Tom Rule on my fields.

The Double Play Rule/Tag Up Rule:

A tag up rule is pretty cool; you can advance a runner on a fly ball by yelling tag up. After the ball is caught or if it is caught the fielder can throw to the strike box if he misses the strike box the runner scores or advances.

Scoring the game and value of hits:

Single markers are placed approximately 10 to 40 feet from home plate on the foul line. A ball hit in the single area (i.e. the area between batters box and single markers and not caught in motion, is a single) if it does not reach the singles area it is a foul ball.

Double markers vary but 40 to 60 feet is typical, place the markers on the foul line and two on the field. A ball hit in the air in this marked ‘double area’ and not caught constitutes a double. At Little Ebbets Field there were no cheap extra base hits, you had to hit the wall for a double which was 80 – 110 feet from home in the air.

Triple markers are typically balls that hit a fence or 60 to 80 feet back follow same instructions as with doubles. At Little Ebbets we had a specific area for triples, it was the mesh above the wooden fence in right field. It extended from the right field line to dead center field. The wood line was 7′ and the triple line was 7′ – 13′ feet.

Homeruns are over the fence or at least 80 feet away, anything shorter is homerun derby!

I prefer 80 some odd feet down the line and 100 feet to CF. You can customize this as need be. If you have a “straight fence” it will actually be longer down the lines than to Center. Make sure the homerun line run is clear and you have some type of foul pole. Foul poles can be fun, I hit my share, and they also keep the peace.

Example: These rules are the standard ‘Imaginary Runner Rules’. A player hits a single – the team has a man on first base. The next player hits a triple – the team now has a man third one run in. Third batter hits a home run – two runs score! (The imaginary runners on third, plus the home run.) This is standard Backyard rules, Kickball rules, stickball rules and any game with no runners.

You can try to use a system where runners advance as in real Baseball which I like as well while in other leagues you have the force runners rule. The problem with the latter is that it can take 4 hits to score a run. For example, let’s say you lead off with a double or triple, it takes 2 – 3 singles to score a run. So you get a leadoff single, then hit a double it is second and third, then a single does not score a run? As a result of the previous, we adopted a rule base runners advance the number of bases the batter gets.

Make or buy a strike box. The strike box ends the” that was a strike” arguments. Strike Boxes vary, we use a 30 x 20 box made from tin and backed by wood that is 17 inch’s off the ground.

Sizes are arbitrary and if you are traveling to tourneys they can be very different. We had a 34 x 24 box at one time and what we found was that was too big. There are several options to make one or buy one. We have made our own and it takes an hour. You need ½ PVC Pipe. You need 4 tees, 2 10’ long straight pipes and right angle 90 degree pieces, 6 total. They need to be squared. You need to decide the size that works for you, for us we used 30 X 22, Strike zone 17 high off the ground. I used tin for the box itself; I like the sound of the ball against the tin. Measure and cut the tine with tin snips. You can use, plywood, mesh, and other materials, although, I recommend something that makes noise. If you throw a pitch that hits mesh and batter doesn’t look back and there are several balls on ground it could lead to a dispute.

Depending on your skills buying one may be better and a bought strike zone typically travels better than a hand made one. If you make one make sure to measure carefully or else your strike box will be uneven.

One that we like is the Xtra Fielder, it comes with Xtra Fielder The Backyard Baseball Game(4 Net Set) with Pro Strike Zone and Wiffle Ball and Bat, Beach, Lawn, Game Set

Little Ebbets Field decided that 5 Balls is a walk and 2 strikes is an out.  The first strike can come from a ball hitting the box whether it is swung at or not, a swinging strike or a foul. The second strike can be a foul tip into the Box or a ball that hits the box, swung at or not, or a ball that is swung at and missed. Some leagues and other groups follow the rule that 6 balls is a walk. If you want the game to move along you need to have walks, which forces a pitcher to throw strikes, otherwise they can keep throwing pitch after pitch until one works for them.  We like the 5/2 Rule and we also have a 4 foul rule, meaning 4 fouls is an out. Keep in mind that our rules are meant to move the games along. Little Ebbets Field typically had dozens of players waiting to play the next game.

If you play abroad here are some of the other rules people play with balls and strikes:

One and done, if you swing and miss you are out or if you let a ball hit the box without swinging at it you are out. No fouls so your second strike, if it goes foul, is an out.

Little Ebbets Field had a 41-foot mound; anywhere in the 38 to 43 foot area is good. Pitching speed is your choice . In league play many leagues do not allow just one person pitch all of a team’s games. Most leagues have inning limitations, which is smart. Otherwise, one great pitcher can dominate a series or season. However, tournaments are a different story.

There are unlimited speed leagues with fast plastic. I have seen balls thrown 90 MPH and higher. Consider what level you want to play at before you sign the dotted line.

To scuff or not to scuff, that is your choice. A Wiffle Ball is made to have serious movement without any help. That said, scuffing has become like the spitball in MLB before 1919 when Ray Chapman got killed by a ball that was so dirty you couldn’t see it.

It is good to have some rules that way it will help control the game and keep it going.

Long at-bats when a pitcher can just keep throwing and hoping for that perfect pitch can create long games. We experienced this a few times and it made for unpleasant games. Thus we created a walk rule right away.

What’s fun about Backyard Ball is compact areas can provide special rules. We have played that balls caught off of the Roof are outs, cherry picking off of fences is allowed, so you can all type of fun rules and you can play wherever you want and adapt your own set of rules! Rules are important to keep the game moving and use what works for you and by all means have some fun with it! 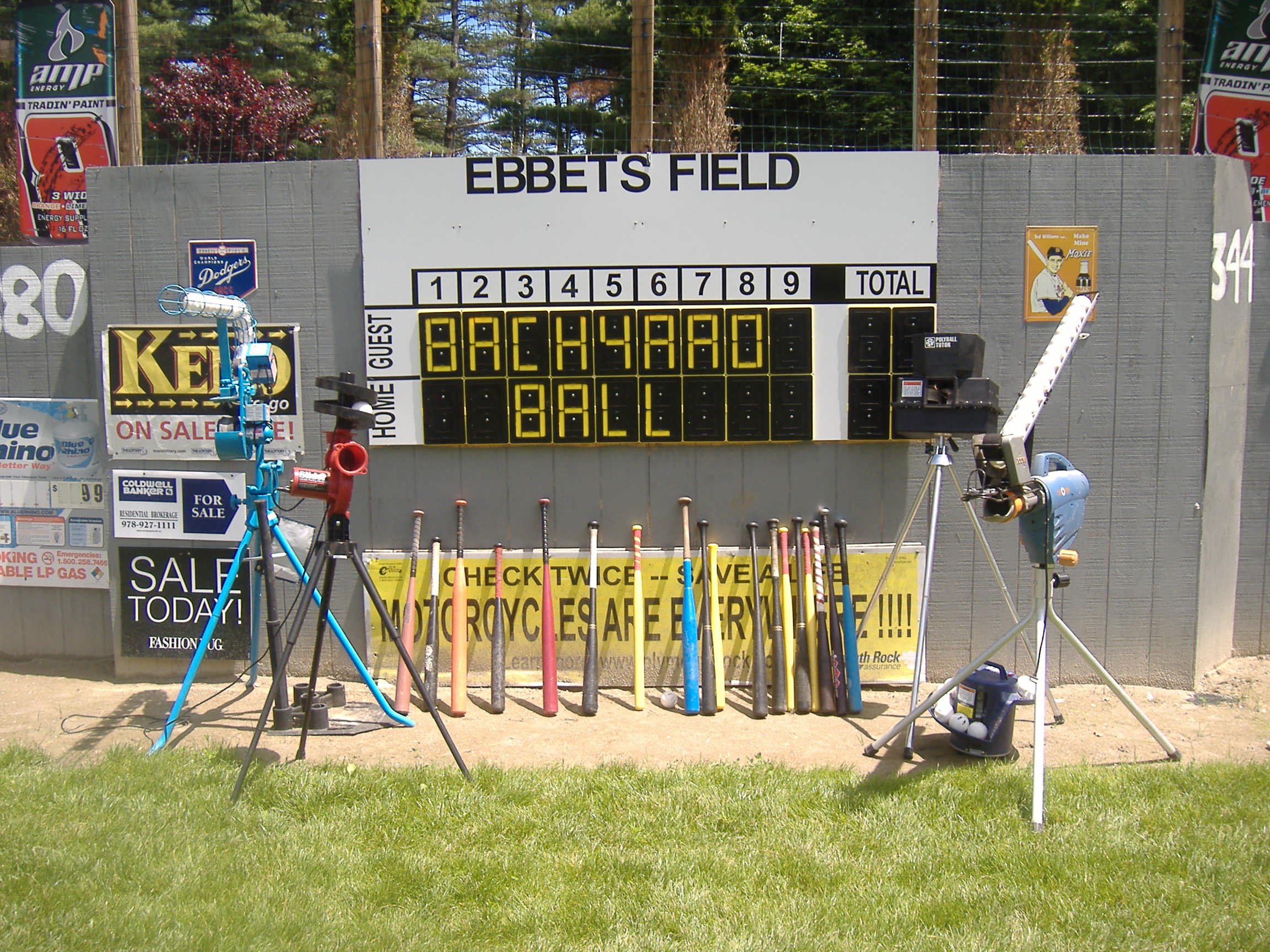 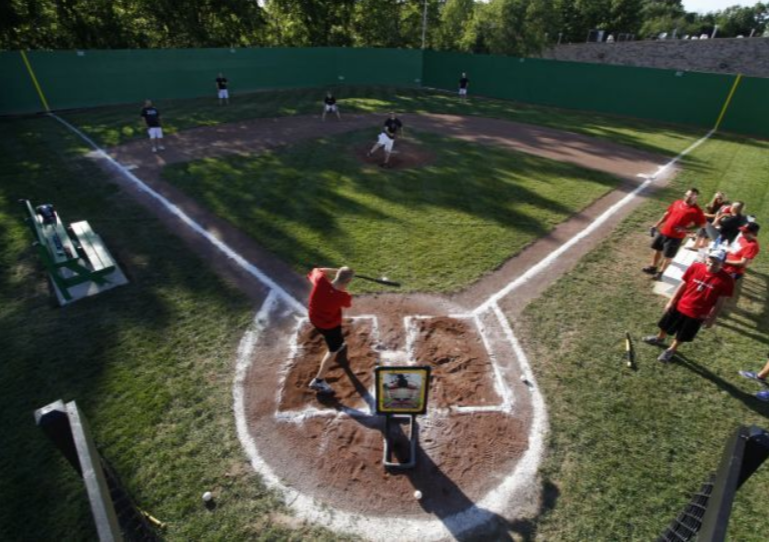 Wiffle ball stadium is a field of dreams 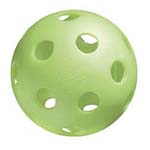